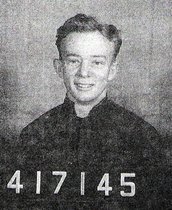 Bill Young was just 21 years old when he died, shot down with his crew over France on the night of the 4th/5th July 1944 on his 21st Operational flight. He lies buried in a collective grave with five of his crew in Marissel French National Cemetery, Beauvais, half a world away from his home in a mining town in Australia. 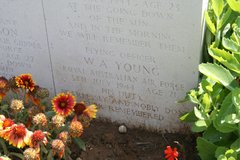 I had been chasing for some time for more information on the other members of my Father's crew and as part of this had contacted a local historian in Bill Young's home town of Broken Hill, New South Wales to see if there were any local living relatives. In December 2005 Ray Allen told me that Bill had been an only child, although I have since found that he actually had three sisters, and that his parents had both passed away in the late 1950's, leaving the trail cold.

In March 2016 I was contacted out of the blue by Bill's niece, Marguerite. She told me "Billy Young had 3 sisters. One, Kath, passed away at 21; Lilian also was childless whilst the favourite sister Eunice (nee Young), who always fondly regaled stories of Bill to me as I was growing up, passed at 90 in 2009. I am her only child, Bill's neice. We do have cousins in Adelaide and Broken Hill. My mother always felt that the Australian records were incorrect and I feel so relieved that you have set them straight. Sadly she was unable to know that."

I was lucky enough to meet up with Marguerite when she came through London. This journey has always been an interesting and surprising one!

Back in 2005 though, it seemed that the trail was cold, and that looked like about it for getting more information on my Father's skipper.

In May 2006 though Ray got back in touch. He had spotted an article in the local paper, The Barrier Daily Truth which talked about Bill Young and his friendship with Australian cricket legend Keith Miller. 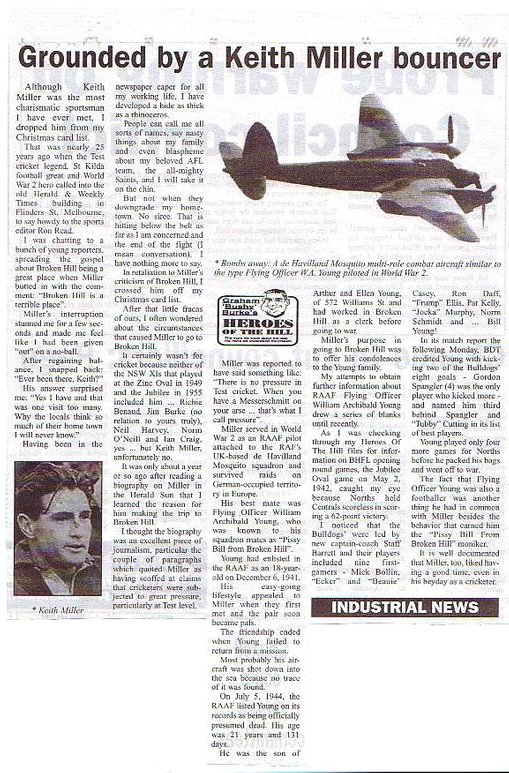 This article, written by Graham "Bushy" Burke, described Keith Miller's great friend, Bill Young from Broken Hill, as having gone missing on a training run over France in a Mosquito which did not match all the facts for my Father's skipper. It was undoubtedly referring to the same Bill Young that Ray Allen had been chasing down for me, giving the details of his parents matching those given to me by Ray, and stating he had died on the 5th July 1944.

I contacted Graham Burke and he put me on to Ron Reed at the Melbourne Herald Sun who had mentioned up the connection in an article written about Miller's funeral in October 2004. Ron had written about how Miller had named his four sons, the eldest, Bill, being named for his great mate in the war years, "Pissy" Bill Young, from Broken Hill, who had not come home.

Ron pointed me at Miller's biographer, Roland Perry (Keith Miller - The Life of a Great All rounder, published in the UK by Aurum Press), and his youngest son Bob Miller for more information.

Perry was sceptical at first having been convinced that Miller's Bill Young had died much earlier than July 1944 and that the story of being lost on a training run was correct based on interviews with men that had flown with Miller.

Bob Miller told me that Bill had been with his Father in Boston, Massachusetts, which was where Keith had met his wife, and Bob's Mother, Peggy. He started a search through his Father's papers to try and find pictures of the two men together. He soon came back with an old, rather fuzzy picture of Bill on Keith's back taken in the UK.

The quality of the picture meant that it still was far from cut and dried, even though the height difference and the shape of the face was right based on pictures I knew to be Bill Young, so the debate continued. I started working through the Australian archives for another William Young who could be the one that was Miller's friend to try to prove Perry's point of view but there was not anyone that came close.

Bob Miller found a second picture, taken in the USA, where his mother and father had met, but this was little better than the first sadly. Bob also found letters from his Mother to his Father mentioning William Young and one from Bill to his Mother written in early May 1944. It was looking like we had our man, but we still had no solid evidence.

As a result of the confusion I applied for Bill Young's RAAF records from the Australian archives in the hope that once these arrived I could compare postings with Keith Miller's record and put the issue to bed that way, hoping to find a common posting in the USA. 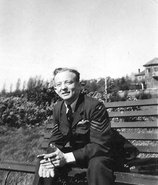 When the records arrived in August 2006 they included some very interesting information and confirmed his various postings through training, none of which were in the US. Bill enlisted the day before Pearl Harbour, 6th December 1941, aged 18 (date of birth 23/2/1923) and underwent his basic flying training in Australia first at 4 IFTS (Initial Flying Training School) at Victor Harbour, S.A.

The records do show that he was engaged to be married when he died aged just 21. His fiancée was listed in his records as Miss J Bedford from Sandal, near Wakefield, Yorkshire. I understand from Jennie Routledge that Miss Bedford may have been a WREN.

Tracing through the postings gave me the following information: 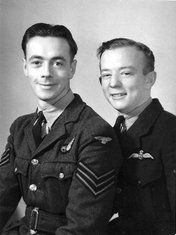 6th December 1941: Signed up to the RAAF in Adelaide, posted to 4 IFTS, Victor Harbour, South Australia.

19th August 1943: Posted to 82 OTU, Ossington, and there crewed up with my Father, Bob Routledge, Frank Wareham and Leslie Jackson.

At this point I concentrated on the two months between leaving Melbourne and arriving in the UK. In a post at the RAF Commands Forum I asked what the standard route taken was for RAAF personnel to the UK. As ever back came the answer like a shot, the standard route was was ship from Sydney or Melbourne to San Francisco, then train from San Francisco to an army camp near Boston, from there by train to Halifax in Canada and then ship to the UK where they were processed at 11 PDRC, in early 1943 in Bournemouth, later in Brighton.

Further research showed that the army camp was actually Camp Myles Standish in Taunton, Massachusetts, just outside of Boston. The journey could take as little as five or six weeks, but Bill took two months, and could have been in Boston for some time as a result. Long enough for he and his mate Keith to meet Keith's future wife maybe?

I got back to Roland Perry and Bob Miller with the latest news and back came the final clinchers for the connection between my Father's skipper and Keith "Nugget" Miller. Roland confirmed the training postings matched Miller's. Bob had found a photo of a training group, probably at Mallala, which showed both Keith Miller and Bill Young clearly. 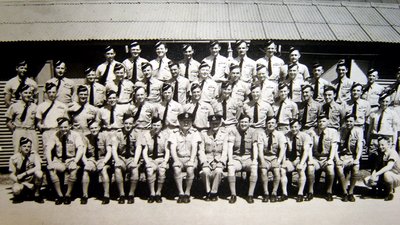 While Keith Miller went on to worldwide fame after the war as one of the greatest all round cricketers ever, and has a statue at the Melbourne Cricket Ground unveiled in 2004, his great mate "Pissy" Bill lies in France, 21 forever.

Miller's most famous quote in a lifetime of famous quotes was, came when he was asked about the pressure of test cricket.  His famous dismissive reply: “Pressure is a Messerschmitt up your arse.”

Roland Perry tells a story of the pair escaping several of their mates getting killed in a German Air raid on Bournemouth, as they were at Dulwich College playing cricket for the RAAF. This raid was on Sunday the 23rd May 1943 when a force of Focke-Wulfe 190 Fighter Bombers attacked the town. Reports say that a hotel which was a favourite haunt of locally posted airmen was virtually destroyed, and also a church spire fell on a pub. Around 70 service personnel were killed (mostly Canadians) and 50 plus civilians in what was Bournemouth's worst air raid of the war. 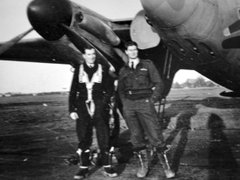 Shortly after this Bill was posted on for the final stages of his training on the 2nd June 1943. I am not sure if this is where the pair will have split up, or whether this would be on Bill's next posting to 82 OTU in August, certainly the pair will have parted routes by this stage as Bill was sent to fly Lancasters while Miller went on to Mosquitos.

While Bill Young progressed on to an operational posting with 44 Squadron, Miller ended up posted to a training unit at RAF Ouston near Newcastle-on-Tyne, No 62 OTU. Miller only ended up flying operationally at the very end of the war with 169 Squadron, over a year after Bill Young had been put on Ops.

The view is that Miller's cricket may have led to him getting a "safe" posting, which is a view expressed by another Aussie he was with at Ouston. It seems highly unlikely, given Keith Miller's character, that this safe posting was something he sought. It seems that his place in the RAAF cricket team, which culminated in the "Victory" Test series between England and Australia in the summer of 1945, was quite likely to have made him more important to the RAAF than "just another pilot".

Many thanks to everyone that has helped me piece together the story of Keith Miller and Bill Young, especially Ray Allen, Graham Burke, Ron Reed and Roland Perry. Very special thanks to Bob Miller for hunting through his Father's papers and giving permission to use his photographs on this page. 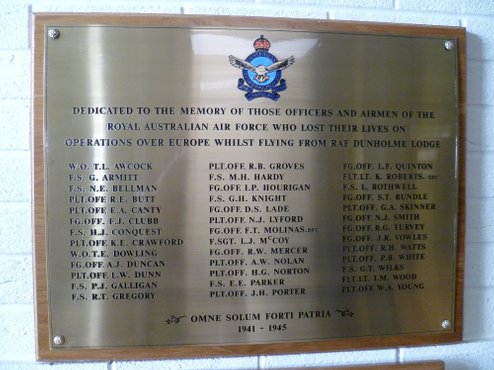