Be Proud of Bomber Command

“There are no words with which I can do justice to the aircrews who fought under my command. There is no parallel in wartime to such courage and determination in the face of danger over so prolonged a period, of danger which at times was so great that scarcely one an in three could expect to survive.”

From a distance of 70+ years it is easy to criticise the policy of area bombing by night that was undertaken by Bomber Command during much of the Second World War. Where modern war has been waged we have seen the video game like pictures of bombs being laser guided onto their targets to take out specific buildings in built up areas, and even then occasionally cause horrendous casualties by either missing their intended targets or as a result of bad intelligence.

At the start of WWII the RAF's bombers were only just a few steps on from the biplanes of the First World War, and often flew individually or in very small formations on missions to attack military targets with little more than dead reckoning to guide them there and back. In the early days the RAF Bombers took heavy losses in daylight raids against the German fighter forces and were forced to switch to night raids, meaning that navigation was even more haphazard.

The RAF were hailed as the saviours of the cause of freedom in the summer of 1940 when Fighter Command retained control of the skies above Southern England and prevented a German invasion in the Battle of Britain. Winston Churchill christened the courageous fighter pilots "The Few" in a famous speech to Parliament on the 20th of August 1940 but it is rarely mentioned that in the same paragraph of that speech when he used the famous words "Never in the field of human conflict was so much owed by so many to so few" he went on to say:

"All hearts go out to the fighter pilots, whose brilliant actions we see with our own eyes day after day; but we must never forget that all the time, night after night, month after month, our bomber squadrons travel far into Germany, find their targets in the darkness by the highest navigational skill, aim their attacks, often under the heaviest fire, often with serious loss, with deliberate careful discrimination, and inflict shattering blows upon the whole of the technical and war-making structure of the Nazi power."

Churchill no doubt knew that his boasts about the effectiveness of Bomber Command were nothing near the truth at that time but they were virtually the last offensive weapon in his hands. As the war moved forward the advent of the "heavies" - Halifax, Stirling and Lancaster bombers - new navigational aids like Oboe and H2S, and new tactics like the Pathfinder force meant that larger bomb loads could be carried further into German territories to damage the infrastructure and manufacturing capability of the Nazi Empire and reduce its capacity to fight back as the tide turned, making Churchill's 1940 boasts into a reality.

The cost was enormous though. Bomber Command lost a total of 55,573 men in WWII. More aircrew were lost in the single raid on Nuremberg on the 30th of March 1944 (545) than in the whole of the Battle of Britain (498). That raid was, by coincidence, my Father's crew's first operational flight, the aircraft damaged by another aircraft's incendiary bomb and attacked by a night-fighter before they got home safely.

Despite the appalling casualty figures, all aircrew were volunteers. Accepted figures now are that 55% of aircrew were killed, while something only just over a quarter survived a tour of 30 operations without being killed, severely injured, captured or shot down. Being aircrew in Bomber Command was more risky than being an officer in the trenches in WWI, yet at no point was there a shortage of volunteers.

Above, I have used my father's initial training group photo as a basis to illustrate the statistics for the fate of aircrew, this is what the raw numbers regarding a man's chances in Bomber Command actually mean, based on the calculations on Rob Davis' Royal Air Force (RAF) Bomber Command 1939-1945 site: Purely by co-incidence the man with "EVD" for evaded is actually my father!

But was it worth it?

The various analysis of the impact of the bombing campaign on Nazi Germany often reach very different conclusions on how effective it was, often making the mistake of applying a modern moral stance or "political correctness" to a 1940's "backs to the wall" situation. In fact the men of Bomber Command were disowned by many after the war as the devastation that they had caused in raids such as the infamous firestorm in Dresden in February 1945 became known. Even Churchill, who had pushed Arthur Harris for the raid on Dresden in support of the Russian advance, distanced himself from the force he had championed during wartime once the conflict was over.

At the end of the day, Winston Churchill, first and foremost, remained a politician.

The recent 70th anniversary of the Dresden raid brought up once again the moral dilemma faced by Britain as a result of the bombing campaign. Nazi propaganda chief Goebbels at the time added a zero to the real number of victims, stating that 250,000 had died when the true number was closer to 25,000, and sought to show that the city, which until that fateful night in February 1945, had been largely unaffected by the war, as a peaceful place full of refugees and hospitals.

Actually Dresden was an industrial city with many factories producing war goods, a major rail hub, and strategically placed to impact the Russian advance into Germany. It was, by every measurement, a legitimate and unexceptional target for the bomber force.

Another Dresden myth is that the raid came so late in the war and Germany was already defeated, making the raid one of vengance rather than of any legitimate military purpose, In fact, the war was far from over in February 1945. At the time, the Rhine would not be crossed by Allied forces for another month, V2 rockets were still falling on London, and it was only just two weeks previously that the Nazi extermination camp at Auschwitz had been discovered by the Red Army.

After the war, the new masters of Dresden, the Soviet Union and the DDR, further used Dresden as an example of how terrible the western powers were and the view of the raid as some kind of exceptional and brutal, unprovoked attack on a peaceful city passed into legend and fokelore. The fact that Stalin had asked the western allies to attack cities in the east of Germany to aid the Red Army's advance was also quietly forgotten.

Both sides of this debate on Dresden are well represented on the internet, with this analysis of the raid by Group Captain Peter W Gray in the "Royal Air Force Air Power Review" 2001 the best I have read on my side of the fence.

I believe the best analysis that I have seen of the imapct of Bomber Command on the course of WWII was made by Air Chief Marshal Sir Arthur "Bomber" Harris himself in a speech to a Bomber Command Reunion Dinner in April 1977. In it he quoted the admiration of US forces commanders for what his boys had been able to deliver, and Albert Speer's views that quite apart from the damage done, the bombing campaign had a huge effect on the German war effort in that it tied up vast amounts of men and equipment on anti-aircraft duties that might otherwise have been fighting on the ground against the allies.

So from 70+ years in the future, probably the idea of setting out to drop bombs on targets often in the midst of civilian populations out of dark skies based on flimsy navigational aids seems like a terrible thing to have done. At the time though it employed every technology available and required the utmost guts and determination to see through from the men tasked with flying the aircraft, so many of whom never returned. History should always be judged in context, not in hindsight.

At the end of the war, despite the real impact of Bomber Command on Nazi Germany's capacity to fight back as the war drew to a close and the true heroism of the men that got back in their aircraft night after night with little statistical chance of surviving, these men and their commander, Sir Arthur "Bomber" Harris, who his command nicknamed "Butch", received no specific campaign medal, and Harris was the only one of the British forces commanders of equivalent rank not to get a Peerage. 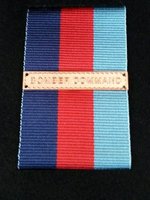 In Winston Churchill's victory address to the Empire on VE Day, May 8th 1945, Bomber Command was the only part of the British military machine that was not thanked individually by the Prime Minister. It was only in 2013 that the UK Government finally relented and issued a specific "Bomber Command Clasp" to veterans to augment the 1939-45 Star, arguing that there should be no specific campaign medal for the command as veterans, mostly by then gone, or in the 90's, had received either the Air Crew Europe Star, or the France & Germany Star.

Sir Arthur Harris refused the late offer of a peerage in 1946 in protest at how his command had been treated, returning to South Africa for a time to work in industry, before returning to the UK and eventually accepting a Baronetcy in 1953

Harris did not have a statue erected until 1992, and it wasn't until 2012 that a permenant memorial to his command, the magnificent Bomber Command Memorial, was opened in Green Park, London. Even then, this had to be largely funded privately, and is maintained by the RAF Benevolent Fund.

Recently there has been an upsurge in interest in the history of the Bomber camapign with people of my generation waking up to what their grandparents and parents did to ensure freedom endured in the dark days of the 1940s. In Lincolnshire, which has always been "Bomber County" most of the airfields that the aircraft flew from now have memorials, and heritage centres are spinging up at many too. The International Bomber Command Centre is being built at Canwick Hill overlooking Lincoln, and was opened officially in April 2018.

So never doubt that the men of Bomber Command played their full part in the Allies victory against the tyranny that was Nazi Germany.

A video of the documentary "Who Betrayed the Bomber Boys?" can be found here. 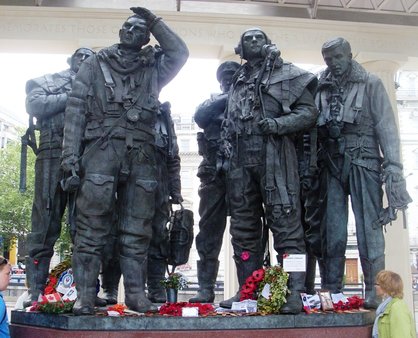 Be proud of them, now and forever

LIE IN THE DARK AND LISTEN

Lie in the dark and listen,

It's clear tonight so they're flying high

Hundreds of them, thousands perhaps,

Altimeters and guns and charts

Bones and muscles and minds and hearts

Deep in the earth they've left below

They're going over in waves and waves

High above villages, hills and streams

And far below them will lie the bays

And coves and sands where they used to be

Safe in your warm civilian beds

Count your profits and count your sheep

Life is flying above your heads

Just turn over and try to sleep.

Theirs is a world you'll never know 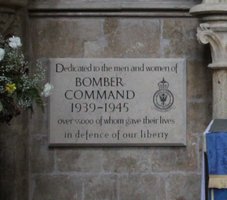