These things start so simply don't they!

My eldest son's school set a Spring project every year and in March 2004 he came home and told me that he had to write 30 pages on a subject to do with the Second World War. Knowing I had my own Father's memorabilia from his time serving in Bomber Command in the RAF I suggested we could base it on that.

The project was excellent thanks to James' hard work on it, and he got an A+ and won the end of year project prize at his school, Gidea Park College.

In the process of doing the research for the project we have found out much more than we ever knew before about my father's time in Bomber Command during WWII and his amazing, yet sadly commonplace story and the stories of the men he shared a Lancaster bomber with in dark hostile skies 75 years ago.

This website now displays to those interested what we found with a little digging around the records available, and much more detail pulled together after making contact with relatives of the members of the crew and continues to grow as I get further information.

The original version of this website (published in 2005) is now long gone due to the web host folding and this is a relaunch (2014). 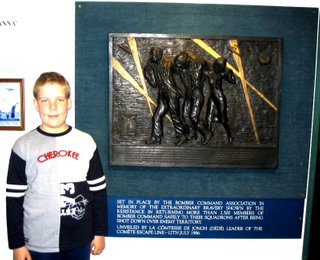 I was brought up knowing that my Dad, John Edgar Wainwright, known by everyone as Jack, then a Constable in the Metropolitan Police, had survived having been shot down by a Messerschmitt 110 night fighter over France in 1944. He had been picked up by the Resistance, had lived for a short while as a Frenchman near the town of Beauvais, north of Paris, with the Pelletier family, and had returned home safely.

Beyond hearing his hearty rendition of "Alouette" which he had learnt in France and came out on particularly drunken occasions and a doll that had been sent to me by the Pelletier family shortly after my birth (they had heard Michael, decided it was Michelle and I was a girl!) the events of 1944 were always kept a little in the dark.

I guess the actuality of the events were a little overwhelming and my Dad would very rarely actually say much about what went on during his time in the RAF. This has proven to be a common story with the Bomber Command veterans and their families that I have met during this journey. The were almost all reluctant heroes and their country has done them a huge disservice by its embarrassment over what they did in the darkest of times, which was just what they were asked to do by their commanders. While the country has rightly celebrated the actions of "The Few" the heroics of "The Many" in Bomber Command were quietly forgotten for many years. This is a theme I return to on the page "Be Proud of Bomber Command".

I was just 18 years old when my Dad was diagnosed with cancer, just starting out in life on my own, and when he died on October 13th 1978 it was a big shock to all of us left behind. He died as a result of smoking, a habit picked up in the RAF so I guess the war did get him in the end.

Then in 1993, shortly after my own first son James was born, my Mum also passed away. My sister and I agreed that I would get my Dad's medals and that she took the little gold caterpillar which was the badge of membership to the Caterpillar club (people who's lives have been saved by a parachute). I also got a couple of my mother's photo albums and a small cigar box of momentos from the war years and just after.

looking at the photos, most of which were my Mum's, my Dad's forged French ID card, his "missing" and "safe" telegrams and looking at the medals spurred me to write to the RAF asking for any records they had on my Dad's service. Back came  a photocopy of his service record, confirming that he had joined the RAF on the 29th July 1941, aged 18 and 6 days and served until March 1947. The records listed a long series of postings including his time with 44 Squadron in 1944, and the word "Missing" against the 5th July, and "Recategorised safe in UK" on the 1st September 1944. 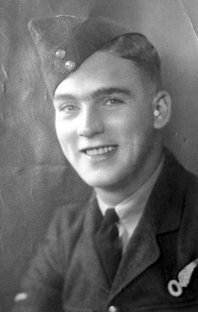 Back then I found this interesting, and even stopped off on my way back from a trip up north in the village of Dunholme in Lincolnshire to see the site of the airfield, but I was a father myself now with a young family and there was no real time to dig deeper so I left things as they were.

I did mount a picture of my Dad in his RAF uniform, with his cap badge and medals in the house on display though, and although they are "just" campaign medals, this elicited a lot of interest from friends and as they grew a little older, my two boys.

When James' school project came along I dug out all my Dad's stuff again and found renewed interest in his story. It was 2004  and I now had the power of the Internet at my disposal in the search for more information. What I found out and how I found it, Dad's story, pictures and documents, those of his crew mates, and my Mum's pictures from her time in the WAAF in World War II are the subject of this website.

I hope you find the site interesting and informative.

If you can add to this story in any way at all, or recognise any of the many unknown faces in the pictures here, please get in touch by email or leave a message at the site guestbook.

William Young's Crew - The story of the crew of Lancaster ME699, through training, their 20 successful sorties into France and Germany, including brutal raids on Nuremburg, Mailly le Camps and Wesserling, and the fatal night that they were lost over France on their way home after attacking the V1 storage and assembly centre in caves at St Leu d'Esserent. This links to the list of operations flown by the crew and stories of the individual crewmen that I have pieced together.

Operations List - The operations flown by William Young's crew, including extracts from the 44 Squadron ORB.

John Wainwright - As best I can, what I have put together on my Dad's time in the RAF including pictures and documents from the time. Linked from here are his RAF Records. and France, July and August 1944, the story of my Dad's time with the brave men and women of the French Resistance after he was shot down.

Bob Routledge - The story of Bob Routledge who was the regular rear gunner in my Dad's crew but missed the fatal flight in July 1944 and survived his tour of duty as related by his wife Jennie. His additional operations with other crews are here and I have also published Bob's flying log book for anyone interested.

Bill Young - The story of Aussie Bill Young, my Father's skipper, killed when ME699 was shot down in July 1944 and his friendship with Australian cricket legend Keith Miller, who named his first born son after Bill.

Bill Rennie - The story of Bill Rennie, who was the mid upper gunner in my Dad's crew and killed when ME699 was shot down in July 1944, as told by his younger brother Richard Rennie, with extracts from Bill's letters home while with the RCAF.

Frank Wareham - What I have found out about the crew's navigator, Frank Wareham, killed when ME699 was shot down in July 1944 as told by a friend of the Wareham family.

Thomas Leslie Jackson - Leslie was the crew's Wireless Operator. He baled out when ME699 was shot down but didn't survice. His story, flying log book and the various correspondence with his family after the loss are here, as provided by his brother's family.

Harold Braathen - Harold was "Navigator 2" on the night that ME699 was lost, flying for experience ahead of his own operational career. Information from his family in Canada and a local researcher, Dan Cimini.

Ronald Houseman - The "Houseman" family website has a tribute to Ronald Houseman who took Bob Routledge's position as rear gunner on the fatal flight in July 1944.

44 Squadron - A brief history of the famous 44 (Rhodesia) Squadron with whom my father flew in 1944.

Lancaster Mk1 ME699 - Information on the mighty Lancaster bomber that the crew flew in, it's history, it's missions and other KM-T for "Tommy" Lancs.

St Leu d'Esserent Mission - The background to the raid and events of the night of the 4th/5th July 1944 when ME699 was shot down after attacking the V1 storage and assembly centre in the caves at St Leu d'Esserent, 40km north of Paris, with the loss of 6 of the 8 crew on board,

Be Proud of Bomber Command - My personal views on the controversial history of the bomber war and the shabby treatment that Bomber Command, it's men and it's commander, were given after WWII. Only very recently has the world woken up to what this incredible group of men, all volunteers, did.

My Mum's pictures - My mother was a WAAF Radio Telephony Operator attached to No 460 Squadron RAAF based at RAF Binbrook and later ar RAF Blyton. I have published some of her pictures here and would appreciate any information on the many unknown people in them if anyone can help. This also links to the story of another crew my mother knew, Don Irving's 101 Squadron Lancaster LL861, who were lost on the 30th March 1944.

Research - How I found out the detail that I have, and the further information I am still chasing, with a subpage of links to the websites that proved useful in the search and the information gathered so far. 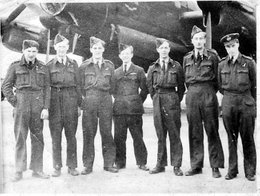 I will be continuing my search whenever I get spare time, in particular I still intend one day to head to the Public Records Office in Kew where wartime RAF records are held. In the meantime, if you know any of the people pictured, or can tell me more about the crew of Lancaster ME699, KM-T, in particular what became of the other survivor, the flight engineer, Sgt William (Bill) Robinson, please get in touch. 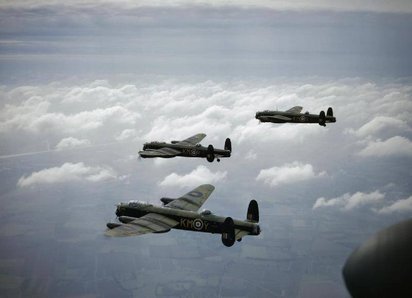