The Lancaster was born out of the demise of the troublesome Avro Manchester, and was designed by Roy Chadwick. While the Manchester had two Rolls-Royce Vulture engines and was considered underpowered and unreliable, the Lancaster was powered by four well proven Rolls-Royce Merlins, or, in one version, Bristol Hercules engines. This proved an unbeatable set up and the Lancaster went on to be the workhorse of RAF Bomber Command from its introduction in late 1941 to the end of the war.

It's only real rival in this was the Halifax, which was considered by its pilots the better aircraft once some teething issues had been sorted out, but It was the Lancaster that passed into legend, just like the Spitfire did when compared against the Hurricane.

From a purely tactical point of view, its key feature was a long, unobstructed bomb bay which meant that the Lancaster could take the largest bombs used by the RAF, including the 4,000 lb, 8,000 lb, and 12,000 lb blockbusters, loads often supplemented with smaller high explosive bombs or incendiaries.

The versatility of the Lancaster was such that it was chosen to equip 617 Squadron, and was modified to carry Barnes Wallis' designed Upkeep "Bouncing bomb" for Operation Chastise, the attack on Germany's Ruhr Valley dams.

Although the Lancaster was primarily a night bomber, it excelled in many other roles, including daylight precision bombing and some Lancasters were adapted to carry the 12,000 lb Tallboy and, ultimately, the 22,000 lb Grand Slam earthquake bombs.

Postwar, the Lancaster was supplanted as the RAF's main strategic bomber by the Avro Lincoln, itself a larger permutation of the Lancaster. Instead the Lancaster took on the role of long range anti-submarine and air-sea rescue patrol aircraft until the Avro Shackleton replaced it in this role too

It was also used in roles as diverse as photo-reconnaissance and aerial mapping, as a flying tanker for aerial refueling, and as the Avro Lancastrian, a long-range, high-speed transatlantic passenger and postal delivery airliner. 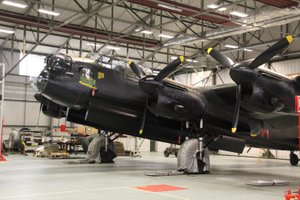 The majority of Lancasters built during the war years were manufactured by Avro at their factory at Chadderton near Oldham, Greater Manchester, and test flown from Woodford Aerodrome in Cheshire.

Other Lancasters were built by Metropolitan Vickers (1,080, also tested at Woodford), and Armstrong Whitworth. The aircraft was also produced at the Austin Motor Company works in Longbridge, Birmingham, later in the Second World War and postwar by Vickers Armstrongs at Chester as well as at the Vickers Armstrong factory, Castle Bromwich, Birmingham.

Only 300 of the Lancaster B IIs, fitted with Bristol Hercules engines, were constructed. This was a stopgap modification caused by a shortage of Merlin engines as fighter production was considered of higher priority. 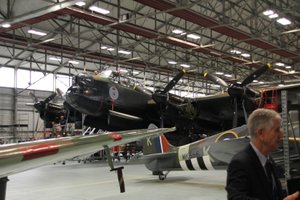 The Lancaster B III had Packard Merlin engines but was otherwise identical to contemporary B Is, with 3,030 B IIIs built, almost all at Avro's Newton Heath factory.

Of later variants, only the Canadian-built Lancaster B X, manufactured by Victory Aircraft in Malton, Ontario, was produced in significant numbers. A total of 430 of this type were built, earlier examples differing little from their British-built predecessors, except for using Packard-built Merlin engines and American-style instrumentation and electrics.

The final production version was the Mark VII and was made by the Austin motor company at their Longbridge factory. The main design difference with the Mark VII was the use of the American-built Martin dorsal gun turret in place of the English Nash & Thompson one; they had to be mounted slightly further forward on the fuselage for weight balance. All were produced too late for the war in Europe and were tropicalised and upgraded as the Mark VII (FE) for use in the Far East against Japan.

Today there are just two remaining that are airworthy. One, PA474, was originally restored to flying condition by 44 Squadron, and is now operated and maintained by the Battle of Britain Memorial Flight and one, FM213, is flown by the Canadian Warplane Heritage Museum, although this is not in its wartime configuration having seats fitted to carry passengers.  These two aircraft came together in the UK in 2014 for a memorable summer of joint displays. A third Lancaster, NX611, "Just Jane" is a mobile, but non airworthy, aircraft which resides at the Linconshire Aviation Heritage Centre at East Kirkby airfield.

Other, non flyng and static displays are housed at various museums across the world as listed here. 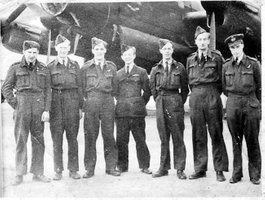 The Lancaster had a standard crew of seven. These were: Pilot, Flight Engineer, Bomb Aimer, Navigator, Wireless Operator, Mid Upper Gunner, Rear Gunner. the Lancaster was the first heavy bomber to be built to be flown by a single pilot rather than two due to the overhead of training and maintaining so many trained pilots when losses were so high. In the Lancaster this was modified to be a pilot and a flight engineer, who was responsible for assisting the pilot with certain controls and instruments and maintaining balance between the various fuel tanks spread around the aircraft.

The Bomb Aimer could often also at a push navigate and would operate the front guns if these were needed, and the Wireless Operator was also usually a qualified air gunner.

Sometimes additional crewmen were carried, either in a training capacity, for example the 8th man on my father's aircraft when it was lost was F/O Harold Braathen, a Navigator on a familiarisation mission, or a mission specialist, for example  F/O Ralph Litchfield, RCAF, who was responsible for the ABC radio jamming equipment on as Don Irving's LL861 of 101 Squadron.

The most famous aircraft in this group was ME669 in which Norman Jackson won his Victoria Cross during the raid on Schweinfurt on the 26th/27th April 1944. 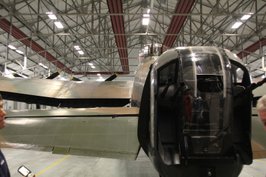 ME699 was delivered to 44 (Rhodesia) Squadron at Dunholme Lodge on the 15th March 1944 and given Squadron marking KM-T (Tommy), replacing the previous KM-T, Lancaster ND538, which was lost on the night of 22nd March 1944 in a raid on Frankfurt, with four dead and three taken PoW. It was the eighth of ten Lancasters to wear KM-T (see details below).

ME699 was lost on her 30th sortie, four of which were abandoned without an attack being made while over the target due to concerns about bombing French civilians. Rob Davies says that wartime figures showed that the average number of operational sorties completed by a bomber aircraft was "between thirteen and fourteen", so ME699 did better than most aircraft.

The aircraft was shot down by fighters near Ormes (Eure), 14 km WNW of Evereux en-route to Augsberg over France, with all seven crew taken PoW. This was a low-level, daylight raid to bomb the MAN U-Boot diesel engine factory in Augsburg.

It is thought this Lancaster was shot down by a Bf 109 ‘Black 7’ piloted by Uffz Pohl of II./JG 2 Richthofen, who is reputed to have scored the unit‘s 1,000th victory of the war.

The crew managed to reach Vichy France, where they were arrested fourteen days later.

This aircraft was lost near Lambrechtshagen, 7 km WNW of Rostock, Germany. Six  dead, one taken PoW.

This was an all Rhodesian crew. The wreckage was found close to Lancaster I R5555 which suggests the aircraft may have collided. R5555 was being flown that night by the new squadron commander, Wing Commander P.W.Lynch-Blosse DFC, who was flying his first mission with the squadron.

W4106 was written-off after crash-landing during a night-flying detail at RAF Waddington. There were no injuries.

This aircraft was shot down by a night-fighter piloted by Hptm Hans Joachim Jabs, IV./NJG1 and crashed in the Waddenzee with six dead and one taken PoW.

Four are buried in various Dutch cemeteries and two, F/O Kirkham and Sgt King are commemorated on the Runnymede Memorial.

This aircraft crashed at Otterfing, 27 km SSE from the centre of München., cause unknown. All seven crew were killed.

Funerals were held at Otterfing on 4th October 1943. All members of the crew have since been re-interred in the Durnbach War Cemetery.

The aircraft crashed at Rossdorf from where burials are reported to have taken place on the 22nd December 1943. They have since been re-interred in the Durnbach War Cemetery.

Crashed near Brauneberg on the Mosel, 6 km WSW from the town of Bernkastel- Kues. Four died, three taken  POW. Those killed are buried in Reichswald Forest War cemetery.

See a detailed account of the loss of this aircraft here.

This aircraft was hit by Flak over the target which badly damaged the Lancaster and killed F/O Haworth. F/S Walters, the W/Op, took over the controls and succeeded in flying the damaged Lancaster back across the Channel.

When satisfied he had brought the crew to safety, he ordered them to bale out. All did so, including F/S Walters, however, Sgt Seiler's parachute failed to deploy. The bomber crashed at 17:45 on the 1st November 1944 near Battle, 6 miles NW of Hastings, Sussex.

For his courageous actions, F/S Walters was awarded the Conspicuous Gallantry Medal (CGM). The citation read:.

This airman has participated in a number of sorties, including attacks on Karlsruhe, Nuremburg and Munchen Gladbach. In November, 1944.  he was air bomber in an- aircraft detailed to attack Homberg. In the vicinity of the target the aircraft came under heavy fire and was struck by high explosive shells. The cockpit was shattered. The pilot was killed and the flight engineer was badly wounded. Flight Sergeant Walters promptly assisted another member of the crew to remove his dead comrade from the pilot's seat and then took over the controls. The aircraft had sustained severe damage. One engine had been put out of action, whilst a second and a third were reduced in power and vibrating badly. The hydraulic system was damaged and the flaps had edged down.   Despite this. Flight Sergeant Walters, though lesser experienced than a regular pilot, brought the aircraft to an even keel and headed for home.  Although only one engine was giving full power he reached an  airfield near the English coast. The aircraft was too badly damaged for Flight Sergeant Walters to attempt to bring it down safely. He gave orders to the crew to release their dead captain by parachute and then to abandon the aircraft themselves. Not until his comrades were all clear and he was satisfied that the aircraft was headed out to sea did this gallant air bomber leave himself. His cool courage, outstanding resource and determination set an example of the highest order.

F/O Haworth, who came from Southern Rhodesia, is buried in Maidstone Cemetery. Sgt Seiler is buried in Eastbourne (Langney) Cemetery.

This aircraft was transferred to 75 (NZ) Squadron in July 1945 and then scrapped in December 1945. 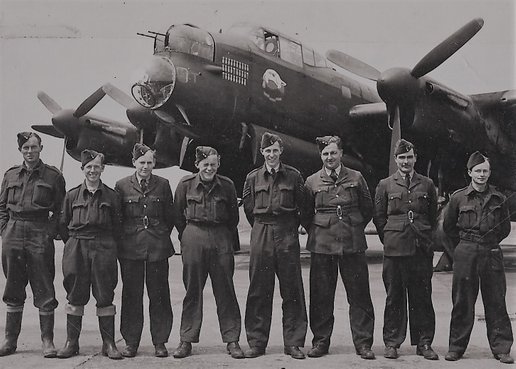