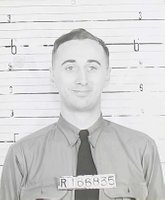 Bill Rennie was a gunner on Bill Young's crew, manning the mid upper turret. He was 28 years old when he died, shot down with his crew over France on the night of the 4th/5th July 1944 on his 21st Operational flight. He lies buried in a collective grave with five of his crew in Marissel French National Cemetery, Beauvais, a long way from his home in British Columbia, Canada.

At 28, Bill was significantly older than the rest of the crew who were just in their early 20s and as Mid Upper gunner would not have joined the crew until they were posted to 1657 Conversion Unit at Stradishall, Suffolk in January 1944. This was where they "converted" from flying Wellington's to four engined Stirling's with a crew of seven rather than five. Flight Engineer  Bill Robinson would also have joined the crew at this stage of training. Jennie Routledge recalled Bill being friendly but a bit reserved.

I had been chasing for some time for more information on the other members of my Father's crew and finally managed to make contact with Bill's brother Richard Rennie, who was still living in North Vancouver.

He wrote the account of his memories of Bill below, with extracts of Bill's letters home while serving with the RCAF.

Bill was born in Edmonton, Alberta on the 27th of April 1916, the first born of my parents, Peter and Elsie Rennie.(nee Taylor).

His accomplishments started soon by scoring 94% in a better babies contest on August 25th 1917 in Vancouver, B.C.  As a pupil at school, he made the roll of honour twice for regularity and punctuality in 1926 and 1928. At this stage of his life he passed the introductory examination of the Toronto Conservatory of Music for violin playing in 1926, and followed up in 1927 with his elementary certificate.

My early recollections are best remembered from the many photographs that were taken of him, which is not unusual for the first born. I do recall that he wore plus 4's, and he was 11 years old when we moved to Pine Crescent from Pendrell Street in Vancouver. It must have been tough at that age to be in the depression, when it hit in October 1929. In the early dirty thirties, he got a job delivering groceries on his bicycle, to augment the family income.

Bill was mechanically inclined which he showed whenever my bicycle needed fixing which was quite often. About this time he became interested in becoming a "ham" operator, and would spend hours conversing with other ham operators all over the world. He built a crystal set and we would take turns listening to the radio stations we could pick up.

Because of the depression Bill was unable to complete his High School education, and joined the work force. When my father obtained a job at B.C. Hardwood Floor, he was instrumental in getting Bill a job at the plant, making intricate corner blocks for the hardwood floors.

He joined the RCAF, where his avocation helped him try to become a Wireless Op/Air Gunner. His service number was R166835 and like most of us in the RCAF he started out as an AC2 rising to Flight Sergeant.

What follows consists of his letters to home, but unfortunately he neglected dates and did not put any dates on them but as the letters were kept in their original envelopes most of the postmarks helped put them in some semblance of order.

It appears as though he joined the RCAF in May 1942, as his first letter announced his arrival at No3 Manning Depot in Edmonton, Alberta with emphasis on the swell meals. Postmarked June 1st 1942. Subsequent letters in June gave details of meals, and that he was picked for the precision squad. He also visited friends and relatives. Apparently was posted to Winnipeg around the start of August. He learned all about machine guns, pistols, and firing of same during August and September, and sandwiched a few girls in between training.

Two letters with dates, September 21st 1942 and October 13th 1942 detail a life of parties, visits with dad's friends, and on October 19th 1942 he wrote about his first plane ride, in a Norseman, and how everything looks different from the air.

He started gunnery on the ground, with an electrically operated turret, and an electric eye for a machine gun. Lots of fun. Met a nice girl at a party, and is now going with her according to his letter of October 27th 1942. Next letter, November 3rd 1942 described his girl friend in detail, 23, 5'2",105 pounds, and a brunette

November 21st 1942 he had spent $4.50 on a pair of ice skates. as the weather should be swell for skating;.10 above .Nothing but talk about leaves, on December 2nd. Variety shows at the Orpheum and also at the school round out the letter of December 11th. The last letter before Christmas was dated December 19th and contained instructions for wrapping his Christmas gifts

January 4th 1943 brought a long letter and how he spent Christmas and New Year as he couldn't get a long enough leave to come home. He went to Carmen, a small town in Alberta, about a mile long, with a big ice rink and three sheets for curling, which he tried. He went skating with the minister's daughter, and neighbour's daughters and others, on Thursday, Friday and Saturday. Christmas dinner with all the trimmings, what a meal. Back to wireless school, they were given an extra 3 1/2 days , so when he got an invitation for New Year's dinner, he  and another boy went, and what a spread. They were invited to spend the night and shared the daughter's bed (he and I). Took his girl friend ,June, to the dance then home and back by 3:00 am.

January 13th letter told of final exams starting the next day. By January 18th he and June were no longer an item, but he and the dentist were, getting a plate and a partial. January 27th, it's official, it went down to 42 below. It's February 5th, and he passed all exams except morse, so back one more squadron. February 22nd, now going out with Ida, and she likes to stay home and talk? March 9th and he got posted to No2 Manning Depot in Brandon because a new order ruled that one can not go back more than 1 squadron course. He chose air gunner over going ground crew.

March 14th guard duty is all. Just out. Of hospital on April 9th, had the flu.  April 20th and still waiting writing from the train on April 30.,heading for No1 Air Gunner Ground School, Quebec City, Quebec.

Letter post-marked May 4th from Quebec, says food rotten, starting classes. May 10 nothing new. May 18 & 20 gunnery practice and exams. May 26th- more of the same.

June 4 seems like exams and shooting is all there is.  Writing from #9 b&g at Mont Joli, Quebec, nothing but exams, then his graduation dance, where he met a cuddly French girl, woo! Woo! The aircraft are Fairey Battles left over from Dunkirk, that he is flying in. June 17, and maybe leave about July 24th. More flying and shooting with camera and live ammo at a drogue, according to a June 26th letter. Last letter from Canada postmarked July 3rd mentioned possible postings, then home on leave.

No more communication until an air letter dated September 9th 1943  , which mentioned his arrival in the UK, and food. More airgraphs in September and October in which he tells of training flights in Wellingtons and leaves spent in Scotland with Auntie Jean, one of dad's sisters and Bunty (Andrew, a cousin).

Letter no. 1 was censored and postmarked about October 18, 1943. Arrived in Scotland then took a train south. At 3PRC (personal receiving center) , where the food was "darn good". After 10 days got leave and went to Scotland, missed the connection to Dunfermline, and went sightseeing in Edinburgh. In Dunfermline found Auntie Jean, who phoned Bunty (Andrew) who was working at Saline at Auntie Kay's place, looking after 2 Italian POW's. Her house was built in 1749.

Another letter postmarked November 18th also censored, tells of food requests, and more leaves. December 12th  now on a 5 week commando course, and mentions seeing Rita again.  January 11, 1944, received February 17, he seems to be moving a lot, with leaves, but getting many parcels. Next letter received February 16th tells of his move to a conversion school which instructed them from Wellingtons, to Stirlings, then to Lancasters .

Letter received February 22nd mentions his electrically heated clothing so he won't be so cold up there. Letter of February 27th, received March 17th,  he went to London and experienced 2 air raids, too noisy to sleep.  March 12th letter was more newsy. Finished conversion unit, and now on Lancasters. Went to Reading to see Carl and Marjorie (Taylor) .March 31st letter states he is now settled in and has a room of his own, and his mailing address is 44 Squadron.

Next letter started April 6th to 14th and very tired. May 2nd, up to Scotland on leave. May 13th he mentions he has been over 10 times, no doubt referring to ops. May 19th more talk about food. May 24th now up to 14 ops. May 31st- now getting some of his missing letters. June 15th, still getting more missing letters, but got leave on June 3rd. In a letter of June 24th, he tells of 2 more ops and that makes 19 so far.

July 2nd--now up to 20 ops plus one the skipper made, counts so it's 21. Instead of 30, it's now 35, and he can probably get leave after his tour  (but that's counting your chickens before they are hatched). He ended his letter with “cheerio, pip pip, bang on, top hole, and all that sort of rot. Love, Bill”

A telegram dated July 7th 1944 reported he was missing as a result of air operations on July 5th 1944. It was later confirmed that he had indeed gone down with the plane. 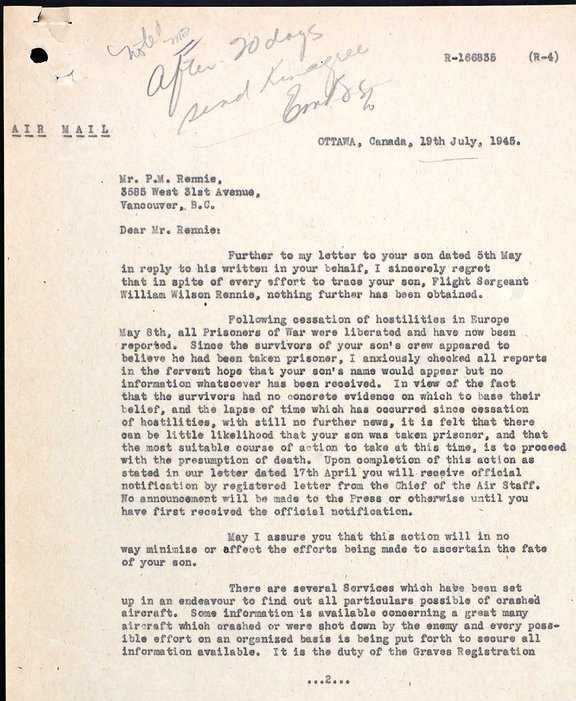 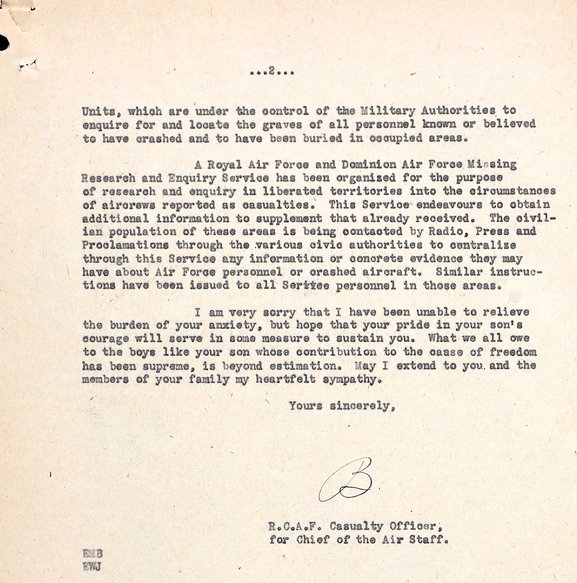 The official listing reads as follows:

Richard Rennie passed away in December 2016. My thanks to him, and his family for their help with this page. Many thanks also for additional information provided by Dan Cimini.

Bill Rennie is remembered at the Canadian Virtual War Memorial. 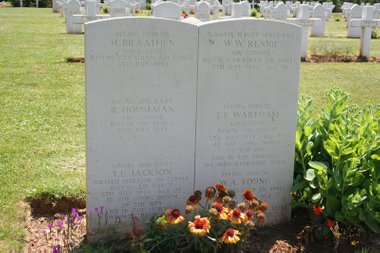 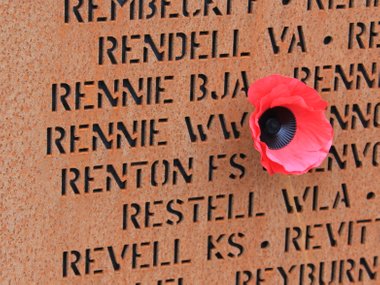