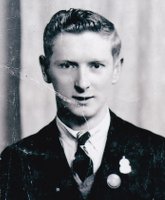 Thomas Leslie Jackson, always known as Leslie, was the crew's Wireless Operator. He was 22 years old when he died, having got out of the aircraft before it exploded and crashed in an orchard in the village of Laversines near Beauvais, but sadly not surviving the jump. His was the only body immediately identified and he lies buried in a collective grave with five of his crew in Marissel French National Cemetery, Beauvais.

Leslie was born in Hull, Yorkshire, on the 2nd April 1922 and was employed before the war in a clerical role at Spear, Houfe and Co, who were "Wharfingers", literally the owners or keepers of a wharf. Leslie was responsible for examining the documentation regarding what ships that were unloading in Hull docks and getting them warehoused, before being delivered onward to their end destination.

Leslie and his brother Norman were very close in age and were often mistaken for twins, and shared clothes from time to time, usually after asking, but not always. Norman recalled catching Leslie out wearing a brand new overcoat he had just bought for himself which was resolved amicably,  just about. Norman later followed Leslie into the RAF, serving in India and the Far East and surviving the war.

Later in life Norman tried hard to get in contact with the two survivors from the loss of ME699, placing adverts in service journals that they may have read, but to no avail sadly. It wasn't until 2018 that Norman's family made contact with me and we were able to share what we know.

When war was declared the port and city of Hull was an obvious target for German air raids and was quickly organised for civil defence. Leslie volunteered and became a cycle messenger, carrying messages around the city to the various groups of Air Raid Wardens.

He was very involved in the local Civil Defense unit where he served with distiction, becoming a deputy divisional officer. Before he left to join the RAF he was awarded a wallet by the City of Hull as a mark of appreciation for his work, see the clipping (left).

Leslie joined the RAF in 1942 and volunteered for Aircrew. After basic training, he was trained as a Wireless Operator, starting flying training in March 1943.at RAF Morfa Towyn, near Aberystwyth then at RAF Madley, near Hereford in May. 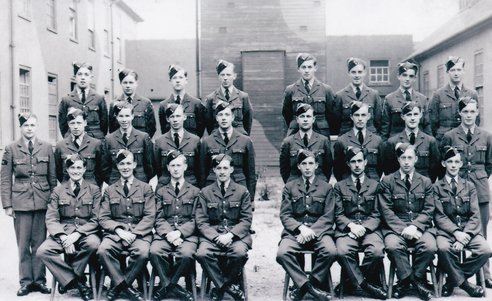 His logbook states that he completed a short, two week, ground based, emergency Air Gunnery course at RAF Manby, Lincolnshire, which qualified him for heavy bombers where there would be fully qualified gunners to man the turrets in normal operations.

A final course in August 1943 at RAF Dumfries completed his training as a Wireless Operator before he was posted to No. 82 Operational Training Unit at Ossington in Nottinghamshire in September. Here he met, and crewed up with, the first five of what would become William Young's crew.

Their training on Wellington bombers continued through to the 19th November 1943, including flying at night. Leslie's logbook records 46 hours 20 minutes of daylight flying and 39 hours 40 minutes of night flying on this course.

On completion of the course, the crew were then posted to 31 Base, Feltwell and presumably given leave, returning in January 1944. They then continued operational training, being posted on to 1657 Heavy conversion Unit at RAF Stradishall, Suffolk. Here they added the two additional crewmen, Bill Robinson and Bill Rennie, to become the seven needed to fly a heavy bomber. Training at Stradishall was on Stirling's, which had been largely removed from the front line in favour of the higher flying and faster Lancaster and Halifax bombers.

With the course completed the very final step was a short course at No. 5 Lancaster Finishing School, RAF Syerston, Nottinghamshire, where a total of 14 hours and 35 minutes flying on Lancs, under half of it at night, saw them deemed ready for operational duties. On the 24th March 1944 the crew was posted to 44 (Rhodesia) Squadron at RAF Dunholme Lodge, Lincolnshire.

The crew flew together operationally from the 30th March to the final mission on the 4th July as a group of seven. the details are here.

Leslie was an outgoing, popular member of Bill Young's crew and his records show that he was a diligent and "exceptional" Wireless Operator.

His best mate in the crew was rear gunner Bob Routledge, and it was Leslie that indirectly saved Bob's life. The story goes that the two were out on a fairly typical night in local pubs and that Bob came off his bicycle into a ditch at some point on the way back to the airfield, ending up falling ill and missing the fateful night in the 4th July 1944.

On the night of the 4th/5th July 1944 William Young and his crew ran out of luck, shot down near Beauvais on the way back to Dunholme Lodge after bombing the V1 storage and assembly facility hidden in the limestone caves at St Leu d'Esserent.

Bill Young ordered the crew to abandon the aircraft and Jack Wainwright, Bill Robinson and Leslie Jackson managed to get out through the hatch under the bomb aimers position in the nose of the aircraft before it exploded and plunged to the ground. Leslie unfortunately did not survive the jump and his body was found nearby.

When the aircraft did not return to the UK a sadly familiar routine sprang in to gear to get "missing" telegrams out to the next of kin of the eight men on board. Jack Wainwright's telegram is reproduced here.

The Commanding Officer of 44 (Rhodesia) Squadron, Wing Commander F.W. Thompson also then wrote to the next of kin following up the telegrams. Leslie's letter is reproduced below. 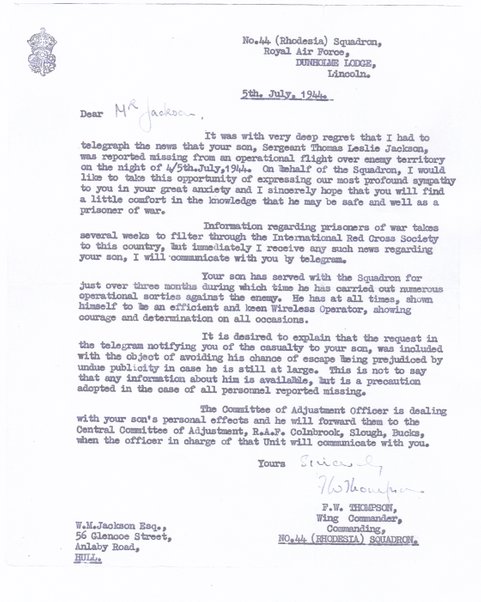 This was followed by a letter from the Air Ministry just over a week later. 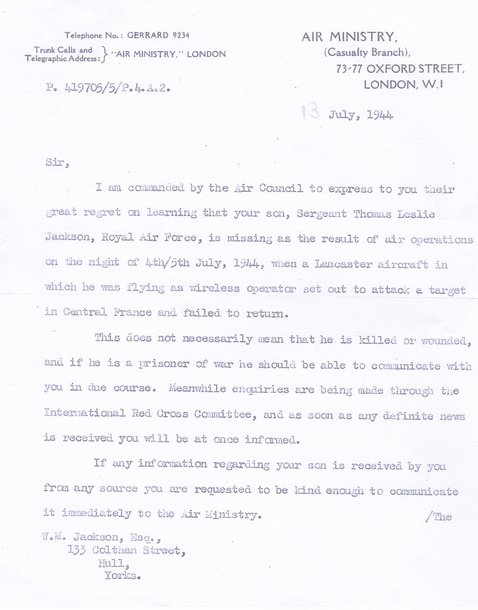 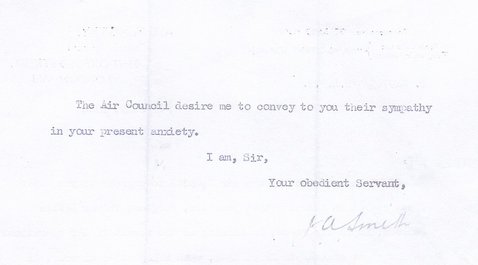 The next correspondence was not until the 15th November 1944, when Leslie's death was confirmed following the return of Jack Wainwright and Bill Robinson to the UK. Quite why it took so long for this is a mystery as Jack had been confirmed safe at the beginning of September. His official status remained "Missing" at this point. 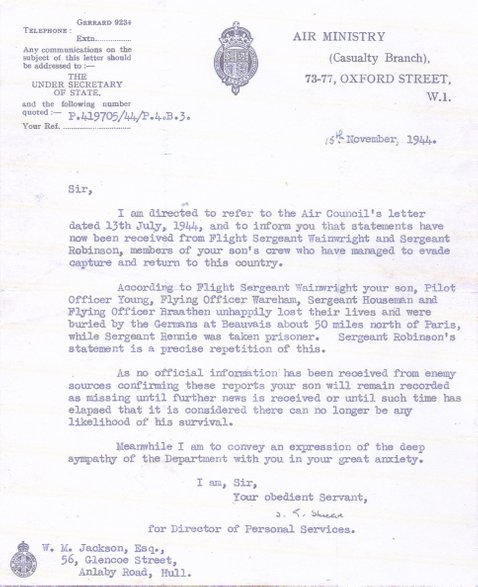 With Leslie now officially missing, the following appeared in the local paper, followed by a letter of sympathy from his Civil Defence Corps. 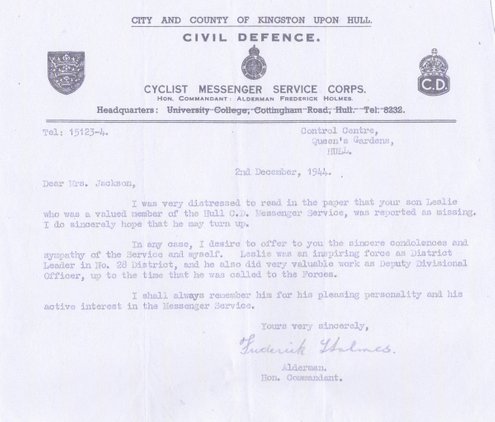 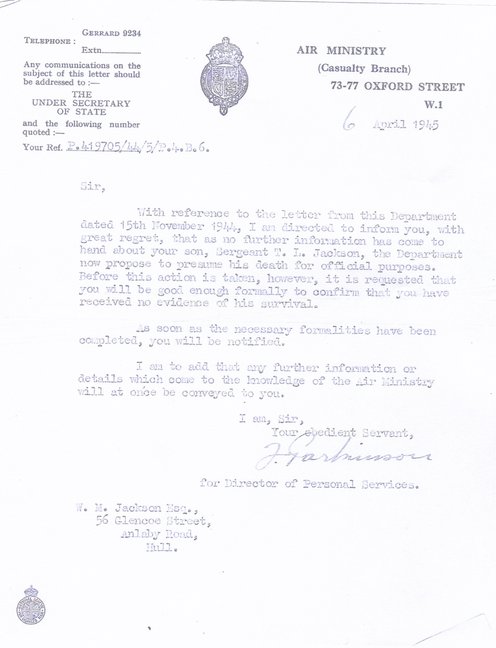 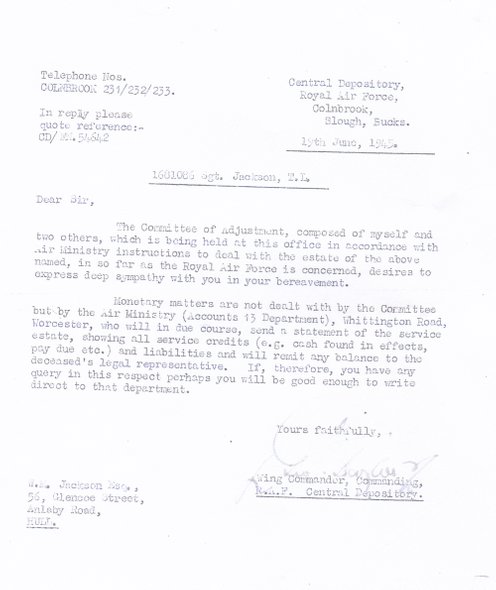 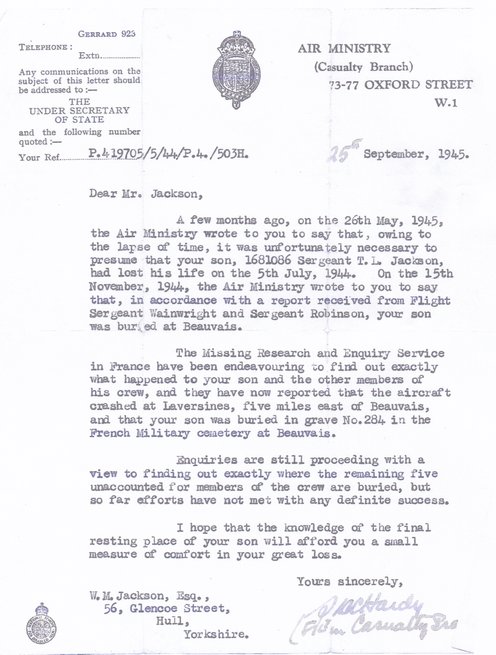 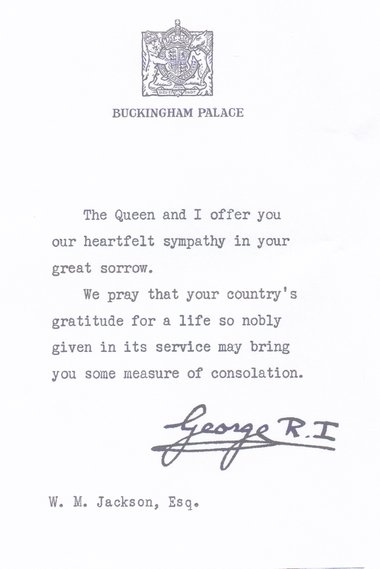