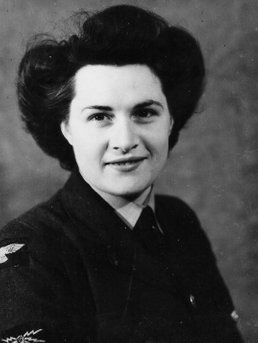 My Mother, Irene Eleanor Sheppard as she was in the war years, was a Radio Telephony Operator in the WAAF. She was stationed at RAF Binbrook with 460 Squadron RAAF, and later at RAF Blyton.

She met my Father during her time in the WAAF and they married in 1947. Their wedding photo is in the gallery here..

During her time with the WAAF she was mysteriously nicknamed "Inky" (if anyone knows why, please get in touch) and from that time I have an album of photo's some of which are reproduced in the gallery below. Click on any of the thumbnails for a larger version of the picture.

The easy ones have notes on the back saying who, when and where. Many have nothing. Any information on the people and places in the pictures would be much appreciated. Drop me an email if you can help to identify anyone in the pictures.

Many thanks to Aussie researcher Daryll Fell who contacted me to do just this and has been able to put names to many of the 460 Squadron pictures.

I have recently added a page dedicated to Pilot Officer Donald James Irving and his crew, 101 Squadron, shot down over Germany on the night of the 30th/31st March 1944, who are pictured in my mum's photos and she obviously knew well.

In 2014 I met Ray Whitely who is the brains and brawn behind the creation of the RAF Binbrook Heritage Centre at the airfield, which is now closed and has been largely dismantled. Ray is working to create an area to display the collection of pictures and artifacts from the airfield and has built a peaceful (if windy) memorial garden.

Ray was kind enough to plant a tree in my mum's memory, a Scot's Pine, which is in front of where the control tower previously stood, where she would have worked in 1944/45.

Following a request from the University of Lincoln during 2018, the RAF centenary year, some of my Mother's pictures were used to illustrate a walking trail around the city.

What is the collective noun for WAAFs? Mum is 3rd row 7th on from the left.

Any idea what the course was and where?

Mum is back row, 5th from the left.

The back of the previous picture, signed by those in it.

Based on best information I have this is either Doug Bulman RAF, Flight Mechanic or Doug Satchell RAF, Flight Armourer. If anyone can confirm the name I would be very grateful.

Identified as being F/Sgt, later Flying Officer Doug Creeper DFC by Daryll Fell, Australian researcher. Doug and his crew completed their 30 ops in April 1945. Doug passed away in December 2017.

Looking up at the pilot of a Lanc. Unknown crew, unknown date.

WAAF's. Can you name any of the faces?

WAAFs in Trafalgar Square - Mum is on the left

The Engineering Section at Harry's farewell party, at Ouston Ferry - 19/7/44

This is a Halifax bomber, therefore not 460 Squadron.

See the Lancaster LL861 page for their story.

Night out in Blyton.

Night out in Blyton

Best of times in England were at dear old Blyton

Back of previous picture

Time off in Blyton

To Inky with love, Mac - in memory of Blyton days

To Rene with best love, your pal Ted

Mum and a fellow WAAF

This looks like a WAAF sports team of some sort, the ball says Swinderby 1945-46. Mum is back row third from the left. Any ideas what the team is or even the sport.

A triumphant sports team with their trophies. No clue at all on this one. Football maybe? Was this a Blyton team?

Mum's brother Dick Sheppard, who won an MC in Italy Taken in Rome 1945, when he was a Lieutenant in the Tank Corps

Newspaper clipping after Dick's award of the Military Cross

Mum and dad on their wedding day in February 1947. This was famously one of the coldest winters in memory, and the photo had to be taken in a studio.

A message from the King

Trail Marker on the RAF 100th Anniversary walk in Lincoln in 2018. Many thanks to Gemma Clapton for the photo.

Detail from the trail Marker on the RAF 100th Anniversary walk in Lincoln in 2018. Many thanks to Gemma Clapton for the photo.