William Young's crew was involved in three different phases of the bomber campaign during their just over 18 week operational career with 44 (Rhodesia) Squadron in 1944.

They joined the squadron at the very end of the "Battle of Berlin" which was Bomber Harris' failed attempt to break German resistance by smashing their capital city from the air. Not purely aimed at Berilin, which would have been too predictable, the battle ended in a terrible night for Bomber Command in a disasterous attack on Nuremberg, which was actually the crew's first operation.

After this, Bomber Command was tasked with assisting the preparations for the D-Day landings, and targets switched mainly to communications and military installations up to the invasion on the 6th June 1944. These were predominantly French targets, considered "easy" in comparison to incursions into Germany, until another terrible night in early May when 42 aircraft were lost attacking a military camp at Mailly.

Lastly, after D-Day, Bomber Command was mainly tasked with neutralising the V weapon threat in "Operation Crossbow". It was on one of these operations, the attack on the V1 storage and assembly area in caves at St Leu d'Esserent, north of Paris, that the crew was lost.

The full list of their operations flown is below.

Pilot Bill Young and Navigator Frank Wareham flew on this mission with experienced crews to get a feel of flying operationally before they went up on their own as a green crew. Bill flew with P/O R.T.H. Manning in ND698 KM-G and Frank with S/Ldr S.L. Cockbain in ND515 KM-Z.

The raid itself was successful with the sudden switch from deep lying targets in the Battle of Berlin to the Ruhr town of Essen throwing off the night fighter force. Essen was covered by cloud but Oboe Mosquitos marked the target well.

This raid was a major failure for Bomber Command and worse single raid losses for the RAF of WWII, 95 aircraft, 11.9% of the force and the deaths of 545 airmen. The raid, and the various cock ups made before and during it are the subject of a lot of discussion still and a number of books including the definitive one by Martin Middlebrook. See also a recent Daily Mail article published on the 70th Anniversary of the raid here.

Successful attack on an aircraft factory at Toulouse. KM-T suffered some flak damage and the Squadron ORB states "Starboard tyre punctured on landing. Internal screening over H2S blasted off by explosion. Fabric on starboard side of fuselage slightly damaged."

ME699 returned to Dunholme Lodge on the 7th April.

This was Aachen's most serious raid of the war. This raid was accurate and caused widespread damage and fires in the centre and in the southern part of the town, particularly in the suburb of Burtscheid.

An attack on railway targets at Juvisy. The attack appeared to be completely successful. According to squadron records KM-T suffered some flak damage although Bob Routledge's Logbook does not mention any.

Bill Young and his crew, were tasked as part of a force of 202 Lancasters and 4 Mosquitos of No 5 Group with 3 Oboe Mosquitos of No 8 Group to attack railway targets at Juvisy. 1 Lancaster was lost in the raid and the attack, part of the pre D-Day plan to disrupt transport and communications in France, appeared to be completely successful.

The raid remains controversial in France, as 392 civilians were killed and over 600 homes, plus several historic and public buildings were destroyed. Delayed fuse bombs continued to kill civilian workers the next day as they attempted to clear up the damage. 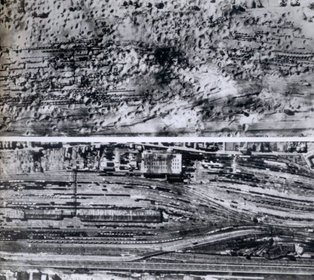 Successful attack on an aircraft assembly factory and an explosives factory at Toulouse.

Attack on a German military camp situated close to the French village of Mailly. 42 aircraft were lost, 11.6% of the force, after a mix up in radio communictions led to the force circling the target awaiting the order to attack.

Successful attack on an ammunition dump at Salbris. See the RAF Bomber Command History site for a picture of the damage caused.

Attack on the Gnome & Rhone factory at Gennevilliers and another factory nearby.

Attack on a large military camp at Bourg Léopold in Belgium. 94 of 190 aircraft attacked including KM-T before the raid was abandoned for fear of hitting the nearby civilian housing. Note that F/Sgt Young has been promoted to P/O Young.

Attack on a railway target at Amiens was abandoned due to cloud cover. KM-T ordered to return to base when over the target.

Mine laying in Kiel Canal (code name "Forget-me-not"). Gardening code names can be found ay the Aircrew Remembered site. An incredibly detailed account of the gardening operations on the night of the 21st/22nd May 1944 can be found at Søren Flensted's Airwar over Denmark site (here).

A description of what Gardening was all about can be found at the ED559 site.

Attack on Brunswick was a failure. The weather forecast had predicted a clear target but the marker aircraft found a complete covering of cloud and bombing was inaccurate.  KM-T returned with its starboard outer engine on fire which was probably caused by flak damage.

Attack on coastal gun batteries on the Cherbourg peninsula, very close to the D-Day landing sites.

Present day pictures of what is left of the battery at Morsalines can be found here.

An attack on the coastal gun battery at Maisy, near the D-Day landing site Utah beach, was abandoned when it was found to be covered by cloud.

Present day pictures of what is left of the battery at Maisy can be found here.

An attack on coastal gun batteries near Calais, part of the deception around the location for the D-Day landings. ME699 was ordered not to attack when over target.

Attack on the synthetic oil plant at Wesseling. German night fighters made contact with the bomber force and 37 Lancasters were lost, a casualty rate of 27.8% of the Lancaster force. 44 Squadron lost 6 aircraft. Despite all this KM-T seems to have had an uneventful trip.

In contrast, the commander of "B" flight, S/Ldr Cockbain, was almost the 7th 44 Squadron aircraft lost that night, as detailed in the ORB below.

The aircraft was diverted to RAF Wescott, in Buckinghamshire on return  - Bob Routledge's Log Book.

See a detailed description of this raid here. KM-T was shot down by a night fighter with the loss of six of the eight crew on its way home.

Bob Routledge's Log Book notes "Missing" in someone else's handwriting. It seems likely that this was written before someone realised he was not on board KM-T that night. The 44 Squadron records still show as Bob being on the aircraft, as can be seen below, when actually the rear gunner that night was Sergeant Ronald Houseman who stepped in at the last minute after Bob was taken ill.

The remaining operations flown by Bob Routledge to complete his tour of 30 operations are detailed in his own story.

The last mention of the crewmen that went missing on the 4th/5th July 1944 in the Squadron ORB is them being posted to WCAD, Uxbridge. This is the War Casualty Accounts Department.