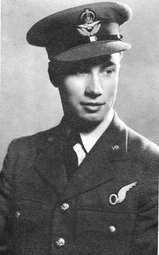 Frank Edward Wareham (left) was the crew's regular Navigator and was I believe born in Camberwell, south London, where his father, Bert Wareham, had a grocer's shop and later lived in Luton, Bedfordshire, where his name appears on the War Memorial.

Frank was an ex-pupil of Archbishop Tenison's School, next to the Oval Cricket Ground, where he is remembered on the School Roll of Honour.

Frank was married when he was with the crew and his wife's name was Violet (maiden name Paul) and may have surviving close relatives. Information provided via a friend of the family indicate that Violet Wareham may have remarried a man called Stanley Kasler in 1948 and and had a daughter, Patricia Kasler, born in 1952.

I had been looking for information on the other members of the crew for some time when a friend of the Wareham family contacted me through the guestbook at the old site. Her mother had been childhood friend with Frank in South London and had remained in touch with the Wareham family after Frank's death in July 1944.

Frank's story as told by a family friend

My mother was born in Camberwell in 1920 and lived the first four years of her life in Brunswick Square. Her parents, Frank and Ada, were very friendly with Mr and Mrs Wareham who lived nearby. There may have been a church connection but I cannot be sure.

Mr and Mrs Bertie Wareham lived at 10 Church Street, Camberwell over the grocery store (or as called in those days a corn chandlers) that they owned. Mrs Wareham’s name was Beatrice but I always knew tham as Aunty and Uncle Wareham

Frank was their only child. His middle name was probably for his uncle on his mother’s side Uncle Ted as we called him. He was born in Camberwell in 1921.

After my mother’s family moved to Hendon in 1924 the two families seem to have remained close and I can remember my grandmother visiting Aunty Wareham on a regular basis. I was also taken over on occasional visits and remember the wonders of the grocery store – in the days when many things were sold loose – and wonderful long corridors and storage places. 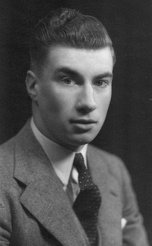 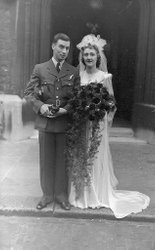 My mother and Frank seem also to have been good friends and sent each other postcards when on holiday. I don’t think they ever went out, but from the way Mum spoke of Frank and remembered him he must have been a dear friend.

Mr and Mrs Wareham sold the shop and moved to Christchurch in the late 50’s. I have a picture of them in their garden taken in 1962 where they appear to be in their 70s. 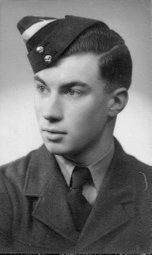 My mother kept a photo album and it contains a studio photo of Frank with a note “love from Frank, Dec 1930”; a studio photo taken in 1938; and two portraits taken in his RAF uniform in 1942 – one I guess as a trainee and one with his “wings” and the initials VR on his lapel. It is signed “with all my very best wishes, affectionately yours, Frank, February 1942”.

There is an RAF Christmas card dated 1943 and a picture of Frank and Violet’s wedding in September 1943. This is quite interesting as on the back it is stamped “Copyright photo South London News Agency number 514. Lordship Lane, East Dulwich, SE22” so I presume the photo was in the local paper. Violet’s name was Violet Lillian Paul and I believe she was born in Shoreditch in 1923.

One somewhat curious item is his that he obviously never re-made his will after he married. The entry on the National Probate Calendar reads:

Apart from this I am not sure I can add much more. I remember visiting 10 Church Street as a child - Bert and Bea lived over the shop. I am sure that there was a photo of Frank on the dresser, but at that age I was more interested in the biscuits and other goodies from the shop below! Mum always spoke very affectionately about Frank. I don't think they ever went out together, but I often wonder if she had hopes in that direction.

As far as I know they had no children and I have no recollection of anyone called Violet. Certainly Uncle and Aunty Wareham had no grandchildren around. 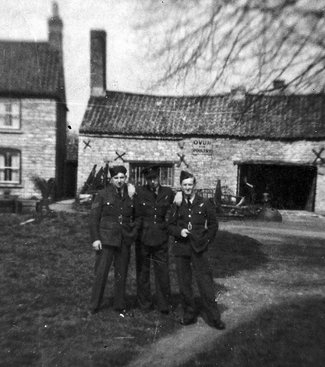