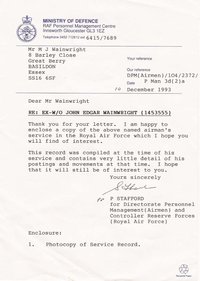 I have included a snippet from the records, Form 453, detailing my Father John Edgar Wainwright's RAF service on his main page. I got these from the Ministry of Defence in when I first received my Dad's memorabilia in 1993. At the time they were not very enlightening but with the help of the various experts around, most of which are listed at the research page, most of it now makes sense.

If you know where any of the units that my Father was stationed with were at the time, or disagree with any of my interpretations, or can fill any gaps please get in touch.. 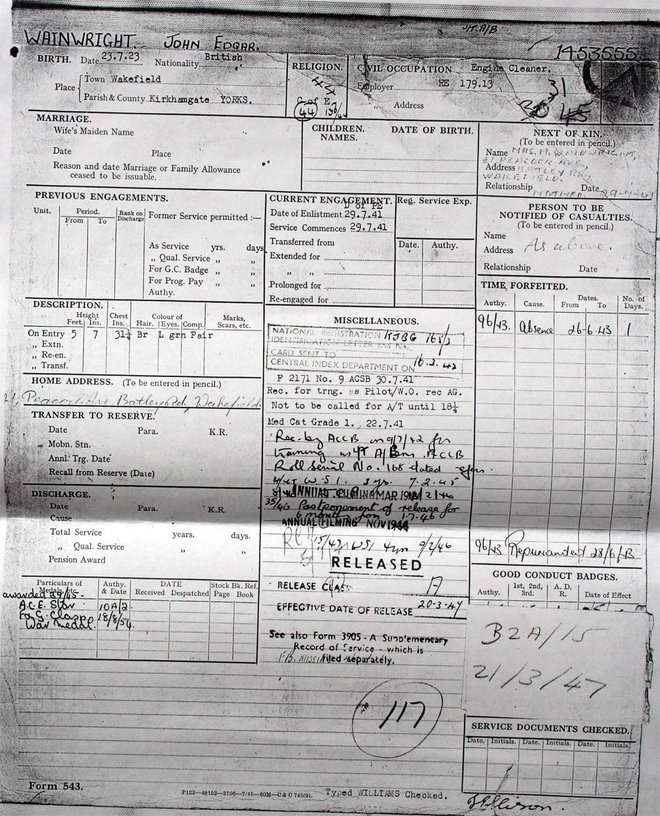 The first page shows general service history, personal details, medal entitlements and disciplinary matters. One that I wasn't aware of was that Dad was reprimanded and forfeited some time off for going AWOL in June 1943, which was probably down to him being late back to the Personnel Reception Centre at Whitley Bay after he returned from training in South Africa.. 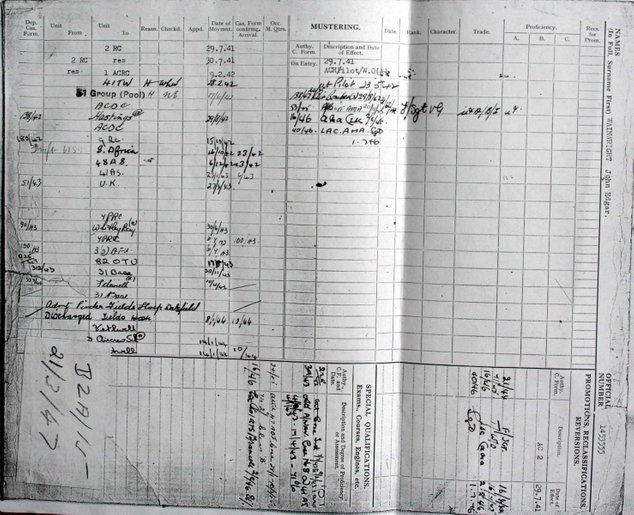 This page details training courses and marks achieved, postings, mustering and promotions/demotions. The postings cover Jack's time from joining the RAF on the 19th July 1941 to the 14th January 1944 when he was at 5 Lancaster Finishing School with the crew in Feltwell, Norfolk.

This page shows the following, as best can be deciphered from what is a photocopy of the RAF's acronym soup laden, hand written records from 70 years ago:.

Having been cut from Pilot training, seemingly some time in late May 1942, Jack was now remustered as an Air Bomber:

Jack was then posted to South Africa on 28/10/42 to take part in Aircrew trade training under the Joint Air Training scheme (JATS), the South African equivalent of the  Empire Air Training Scheme (EATS):

30/6/43 7PRC Personnel Reception Centre, Whitley Bay (It seems likely that Jack was late to this posting, hence the reprimand on the front page of the records)

82OTU will be where my Father will have "crewed up" with the majority of the men he would spend the next months with learning to work and fight as a team in a bomber crew flying on five man Wellington's. William Young's crew would not be complete until they "converted" to four engined heavies in early 1944 with the addition of another gunner (Bill Rennie) and a flight engineer (Bill Robinson), flying first in Stirling's then converting to the Lancaster they would fly operationally with 44 Squadron..

While at Feltwell it would seem Jack was injured or unwell. He was sent to Pinderfields Hospital in Wakefield, discharged from there on 8/1/44 back to Feltwell on 14/1/44 then on to 1657CU 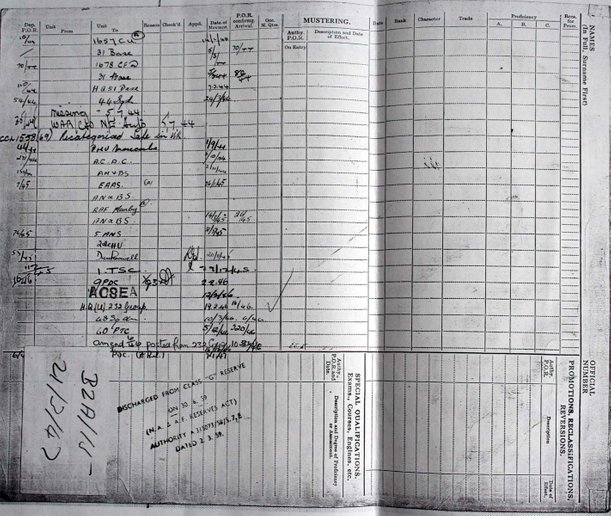 This page details postings from the 14th January 1944 until Jack's discharge in 1947, including the latter part of his training, his posting to 44 Squadron and his being posted "missing" on the 5th July 1944. On his return it details his various later postings including in the Far East with 48 Squadron until he was released by the RAF in January 1947.

This page shows the following, as best can be deciphered from what is a photocopy of the RAF's acronym soup laden, hand written records from 70 years ago:

This page starts with the final stages of Operational training:

14/1/44 1657CU Conversion Unit based at Stradishall, Suffolk, flying Stirlings as a 7 man crew

5/3/44 1678CF Conversion Flight based at Waterbeach, Cambridgeshire, conversion to Lancasters at 5LFS

After returning from France Jack was debriefed then sent to train the next generation of Bomb Aimers:

1/9/44 DMU (Morecambe?) Presumably where Jack was debriefed following his return, and his IS9 debrief on his return to the UK is dated 4th September 1944. He was then given extended leave.

22/12/45 ITSC (possibly 1TSC) Seems likely to be a Transport training unit of some sort prior to being posted to ACSEA and 48 Sqdn.

7/1/47 PDC Personnel Dispatch Centre and released, with an effective release date of 20/3/47

Jack was finally discharged from the RAF Reserve on 30/6/59. 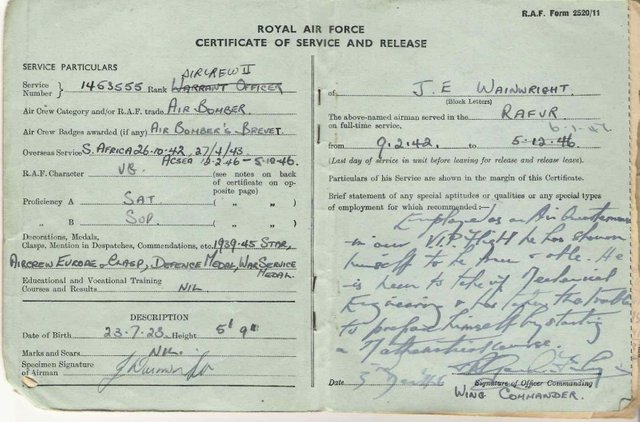